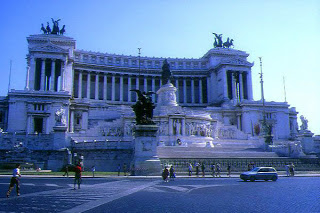 Not the most beautiful structure in Rome, the Victor Emmanuel monument has been given nicknames such as ‘typewriter’ and ‘wedding cake’.
The monument is nevertheless well worth the visit, if only for the great views from the top. The top of the Il Vittoriano is also connected to the campidoglio square, saving you another climb of the capitoline hill.
The enormous white marble monument at the Piazza Venezia was built as a tribute to the first King of a united Italy, Victor Emmanuel II. As King of Sardinia Victor Emmanuel had become a symbol of the movement for a united Italy. After his army joined forces with Garibaldi and defeated the papal army, the Kingdom of Italy was proclaimed in 1861 with Victor Emmanuel as King.
The monument, also known as ‘Il Vittoriano’ consists of a large flight of stairs leading to the Altar of the Nation, dominated by a colossal 12m long equestrian statue of the King. At the foot of the statue is the tomb of the unknown soldier, guarded by two sentries of honor. The monument is rounded off with a long corridor featuring 15m/50ft high columns. On top of the corridor are two bronze quadrigae, each with a winged Victory.