During the Middle Ages, people held a popular belief that birds started to look for a mate from February 14 which gave birth to the idea that Valentine’s Day festival that falls in the middle of February should be celebrated as the day of love and romance. The concept soon gained ground among the lovers and they began to celebrate the day by exchanging love notes and simple gifts like flower. 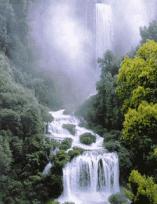 Saint Valentine, the Patron Saint of lovers all over the world was the Bishop of Terni, a town in the green region of Umbria in the heart of Italy  He was  martyred in the 3rd century. The province of Umbria got its name from the Umbrians who inhabited the area in pre-Roman times.
The Basilica of St Valentine hosting the Saint’s remains, is to be found at Terni.
At 6 km distance from Terni are the impressive Marmore Falls. With falls totaling 165 meters in height, they are considered the highest waterfalls of Europe. The Waterfalls are part of the surrounding natural scenery of incomparable beauty, but believe it or not, they are an artificial work of the Romans. The Velino river which at the time spread around a large area creating stagnant waters, a malaria hazard, had to be regulated. Aiming to make these waters deflow, the consul Curius Dentatus had a canal dug which directed them in direction of the Marmore cliff.
Also you should not miss the ruins of Carsulae, an ancient Roman city, the charming medieval village of Cesi
On February 10, 2013   /   Italy Travel Tours Blog