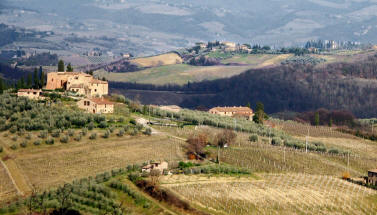 Early morning departure from Rome to Assisi, the mystic town of Saint Francis still surrounded by ancient walls. Explore at your own leisure the tiny town, admire the Basilica of Saint Francis
with its early Renaissance masterpieces by Giotto and Cimabue. Proceed to Cortona, a medieval town in the main cultural and artistic center of the Val di Chiana. Then continue to Siena, the beautiful medieval city famous for the Palio. In th e evening arrive in Monteriggioni for dinner and overnight.

Buffet breakfast. Start a excursion of Montepuciano, an ancient village full of medieval and Renaissance buildings, famous for the “Nobile” wine di Montepulciano. Continue to Pienza, build
by Popo Pio II, well-know for its pecorino cheese and Montalcino know in the world for its famous wine, “Brunello ”. than you will stop in San Gimignano that was founded as a small village in the 3rd century BC by the Etruscans and it has managed to conserve fourteen towers of varying height which have become its international symbol. Enjoy a relaxing wine tasting and savor the typical products of Tuscany region. Proceed to Volterra, the reminiscent old town famous for its mining of Alabaster, the medieval Cathedral and the beautiful Palazzo dei Priori. Return to Monteriggioni for dinner and
overnight.

Buffet breakfast. Start a full day excursion with the visit of Lucca, famous for its intact Renaissance-era city walls; it was founded by the Etruscans and became a Roman colony. The rectangular grid of its historical centre preserves the Roman street plan, and the Piazza San Michele occupies the site of the ancient forum and traces of the amphitheatre can still be seen in the Piazza dell’Anfiteatro. Continue to Pisa, known worldwid e for its leaning tower (the bell tower of the city’s cathedral), the
city is also home of the University of Pisa, which has a history going back to the 12th century. Return to Florence where the program ends.

Not Included:
*Drinks at dinners
*Tips
*Personal extra
*Everything not included in “The tour includes”
HOTELS USED:
*In Monteriggioni – Borgo San Luigi 4*

Prices in Euro ($ rate varies depending on the exchange rate of the payment date) per person :

Optional dinner and overnight in Florence at Hotel Adriatico ****  on day 3:
Euro 119 per person based on double / Euro 154 in single

Extra nights in Rome before or after the program 2013