Murano, the city of glass.

Only a mile or so from Venice, Murano is not one island but a cluster of five little isles. While not as famous as it once was, Murano still historically symbolizes the best of Venetian glass and production continues today. 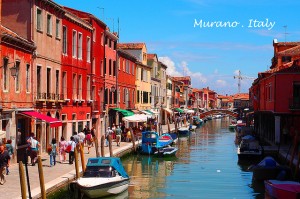 For over one thousand years, glass has been produced in Venice but, with the high risk of fire from the open glass furnaces, the Doge (ruler of Venice, something akin to a duke) ordered the workshops to be moved to Murano in 1292. At the time most of the buildings were of wooden construction, not a ideal combination with fires below. The Venetian rich realized the value of their unique export and so made it illegal for glass makers ever to leave the island, on pain of death or amputation, as a way of safeguarding the secret. The positive side of the coin for these artisans was that, being the source of such revenue, they were flattered and bribed with such rights as being able to wear swords and even marry into the aristocracy. 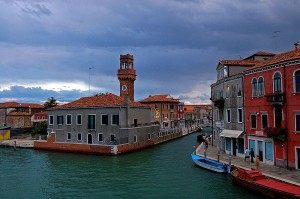 This canny group of workers kept their glass-making techniques a closely guarded secret for centuries and had virtually a world monopoly in the manufacture of fine mirrors. Interestingly there is some evidence that the first spectacles originally came from Murano! 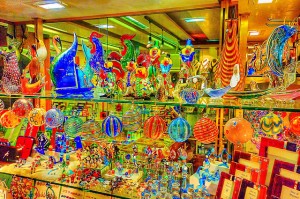 Some of the techniques developed were: types of enamelled glass (smalto), fake gemstones, glass with flakes of pure of gold (aventurine), glass in many colours (millefiori), opaque glass and imitation gemstones.

At its peak, the ísland had some 30,000 inhabitants, many of them involved in a trade supplying fine glass to most of the great palaces´and noble houses of Europe. As history always shows, there is no such thing as an everlasting secret. Eventually other countries learnt the secret processes and the fame of Murano glass slipped into partial obscurity. 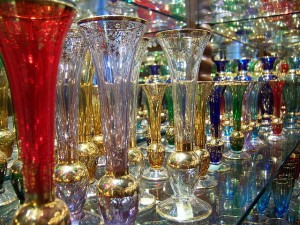 With the rise in tourism over the last couple of centuries. The Venetians (never a race to miss a way of relieving the itinerant traveller of his buck, pound or yen), revived the industry. Your Italy escorted tour representative will no doubt give you some good advice on this subject.

To be honest, it is worthwhile accepting the ´free´invitation to look inside a workshop but do be prepared for the hard sell which will duly follow….. It is also fair to say, looking at the quality of work in the excellent museum, the standards now are somewhat lacking. That, said, there are still some beautiful pieces to be bought, particularly the less gaudy wine glasses, and some beautiful contemporary work is being produced by some of the younger designers, many of whom were not born here.