There are various popular and interesting legends of St Valentine’s Day. Some legends trace the origin of Valentine’s Day to pagan times while others link it one or more Saints of early Christian Church. 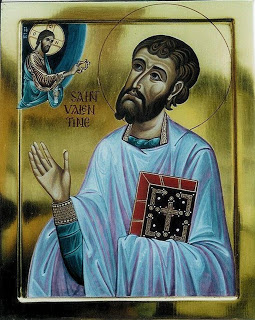 According to one very popular legend, Valentine was a priest in Rome who lived during the reign of Emperor Claudius II. Under his regime, Claudius is said to have engaged Rome into several bloody battles. To strengthen his army, the Emperor continuously needed to recruit soldiers. However, Claudius found that not many soldiers were keen to join the army because of attachment with their wives and families. In order to sever the bond of attachment, Claudius cancelled all marriages and engagements in Rome. Valentine – a romantic at heart priest, defied this callous decree of Claudius by secretly arranging marriages of young men and women. When Valentine’s defiance was discovered by the Emperor, he was brutally beaten up and put to death on February 14, about 270 AD.
For his martyrdom and dedication for the cause Valentine was name a Saint after his death. By Middle Ages, Saint Valentine became popular as the patron saint of love and lovers in England and France to the extent that Pope Gelasius declared February 14 as Valentine’s Day on 498 AD and put an end to pagan celebrations. Thus, Saint Valentine’s martyrdom day became an occasion to celebrate love.
On February 3, 2013   /   Italy Travel Tours Blog