The most talked abut and celebrated region of Italy is Tuscany, the land of ancient pre-Roman Etruscans with their hilltop towns and villages overseeing the plains below. It is also studded with abbeys, convents, villas in rural areas hidden among vineyards, pine cedars and umbrella trees. 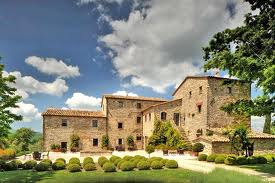 Tuscany, just like other regions of Italy has distinctive history. In the 14th century, the ruling family, the Medici had to strengthen their territory with castles that served for military defense and as refuges for the local people during troubled times. Later, as the power of the Medici increased, the country side was no longer a battlefield, the importance of the castle outposts diminished and large estates became the norm. The large estates became summer residences of the nobles and provided shelters from the plague as well. The Medici themselves promoted this transformation from military to residential and by the 16th century the grandiose villas were born.