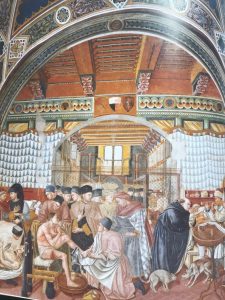 Discover Siena with Italy Travel Tours offering a number of guided and independent tours that include the romantic hill towns of Tuscany.

When we think of visiting the treasures of Italy, many have never heard of the Ospedale Santa Maria della Scala. It sits in the Piazza del Campo, across from the front steps of Siena’s famous green and white marbled Duomo.

Originally founded as a hostel for pilgrims in the 9th century it continued to be a place of refuge for the sick, poor, orphaned and needy until 1995 when it was transformed into a museum. It is known as one of the oldest hospitals in Europe.

Step inside and you find yourself in the Sala del Pellegrinaio or Pilgrim’s Hall. A former hospital ward with its towering walls dominated by a cycle of frescoes. It’s a beautiful example of 14th century medieval architecture.  As your eyes adjust to the light you will see each ancient fresco depicts everyday life as it was in the hospital. Sienese artists including Domenico di Bartolo realistically depict the care and treatment of the sick. The imaginative traveler can smell the metallic odor of blood and hear the hungry cries of the orphaned infant. Ospedale Santa Maria della Scala is a must see when visiting Siena.

Siena is a Tuscan town of many treasures. Discover Siena with ItalyTravelTours offering a number of guided and independent tours that include the romantic hill towns of Tuscany.