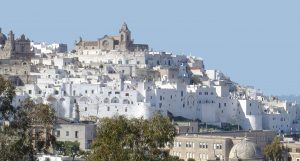 Our newest South Italy tour destination this year is the less frequently visited south, the regions of Basilicata and Pulia.

We offer these tours with Rome or Sorrento departures for those interested in less trendy and crowded destinations, having already visited the most sought  after Italian regions of Amalfi Coast and Tuscany.

One of the highlights of this tour is Matera with its houses carved in the tufa rock that resemble Cappadocian underground cities. The style of architecture is actually originated from ancient Anatolia and initially imported to Italy by Byzantine monks.

The region has vast fields and palm groves neighboring snow-white towns like Noto or Lecce where you can easily feel getting lost in the maze of side alleys hiding little churches off main squares. Lecce is the Baroque capital of Italy with white washed buildings dating back to the end of the XVI century and the first half of the XVII century with the church of S.Oronzo, the Basilica of Santa Croce, the Celestini Palace being some of the most attractive sites of the city.

An other highlight of the tour is the village of Alberobello with its unique cone-shaped dwellings, a UNESCO World Heritage site or the Greek fishing village of Gallipoli (Kallipolis) on the shores of the Ionian sea at the “heel of  the Italian Boot”, in the region of Pulia.