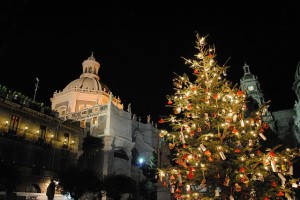 In common with many latin countries, the Christmas season really starts as early as 8th December, the Feast of the Immaculate Conception, when people start decorating their homes. Those of us from North America or Northern Europe have always been used to christmas trees but, while they are now popular in Sicily, they were unknown until the U.S. liberation when the G.I.s brought a little bit of home to the Mediterranean! 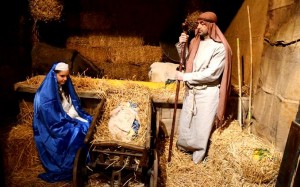 Traditional decoration, as in the rest of Italy (the presepi) and Spain (the belen) is the ‘crib’ or nativity scene. From simple home-made cribs to fantastic and intricate scenes in all the churches and cathedrals, the common theme is always the stable in Bethlehem with Mum, Dad, baby Jesus, shepherds, three kings and assorted domestic animals. 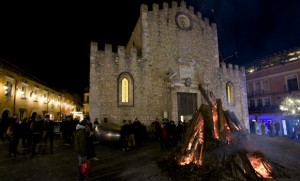 One notable event takes place each year in Custonaci is the ‘Presepe Vivente’ where the locals re-enact the nativity. In many of the smaller mountain villages the locals light massive bonfires to ‘keep the baby Jesus warm’. 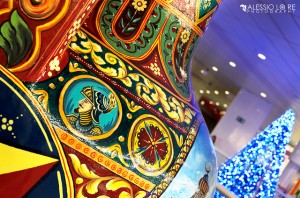 As in many catholic countries, Christmas Eve is the main family occasion. Most families are large and meet up for a truly sumptuous dinner at home, enjoyed by everyone from small children to the great grandparents. The presents are exchanged after dinner, rather than Christmas day. 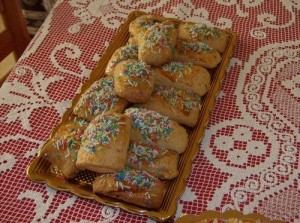 Turkey is starting to appear fairly regularly but there is no special Christmas dish except, perhaps, lamb. In a country famed for its sweet dishes, ‘buccellati’ (large round biscuity cakes with almond, pistachio and dried fruits filling) are obligatory festive fare. 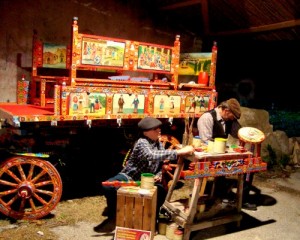 For the next week, Sicilians carry on feasting with plenty of wine, conversation, family reunions and general partying. The highlight comes on New Years eve with the ‘cenone’ (big dinner), another family affair with tables groaning under the weight of food and bottles of Castelmonte Frizzante, a naturally effervescent Champagne alternative, similar to Spumante. Strangely lasagne (but no other pasta) is thought to be lucky eating but the mainland tradition of ‘lucky lentils’ is making inroads and thereby adding to methane gas emissions throughout the island! 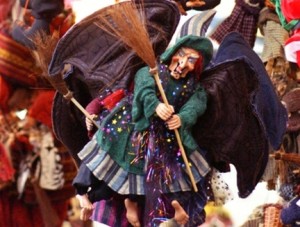 Don’t tell the kids at home but Sicilian children are on a double winner. Not only do they get presents on Christmas Eve, but La Beffana, an ugly old witch, comes and distributes sweets and gifts for all. This is a local alternative to the rest of Southern Europe where it is usually the Three Kings.

Sicily is an amazing place to visit at any time of the year. For me, Blue Danube Holidays, are the specialists with a mountain of experience of this charming island.