The Park of Monsters

The Park of the Monsters

OK, you’ve seen the Vatican, the Coliseum, the Parthenon, the Trevi etc. so many times that you could get a free Italy tourist guide badge from Rome City Council. You’ve got your grandchildren with you on vacation; they’re bored and want to see something different than ‘dead people’s houses’. Where do you take them? 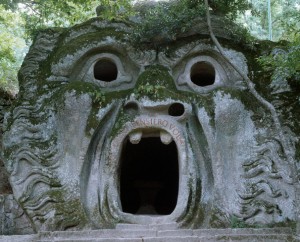 Bomarzo is only about 60/70 kilometres from Rome and the Park is a great day out for all the family but, be warned, do not try using public transport, it’s virtually impossible. If you are brave or foolish enough to drive in Rome, hire a car….. 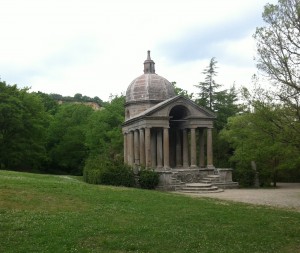 We tend to think that Disney were the inventors of the theme park. The Park of the Monsters precedes our modern offerings by more than 400 years! Originally planned and constructed around 1552, its name was originally the “Villa of Wonders”. 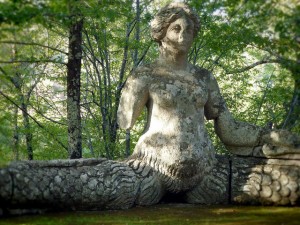 The astonishing concept of possibly the world’s first theme park was the brainchild of one Prince Pier Francesco Orsini who dedicated the park to the memory of his dead wife, Giulia. What is an interesting, but lesser known snippet of information, is that the design was the work of the great Italian architect Pirro Ligorio who completed Saint Peter’s of Vatican fame after Michelangelo’s death and went on to construct the exquisite Villa d’Este in Tivoli.

Over the last couple of centuries, the park slipped into oblivion and became totally overgrown but, in the 1950’s, restoration work started in earnest and the majesty, myth, legend and history are once again available to the public to admire and be inspired by. 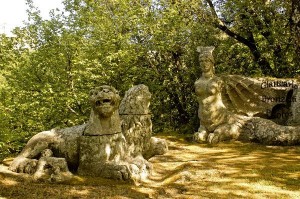 Traditionally, the Italian garden was always neat, symmetric and formal. Bormazo is a counterfoil; a higgledy-piggledy, surreal and eclectic mix of statuary randomly thrown around sol per sfogare il Core (only to set the heart free) as one engraved stone explains. 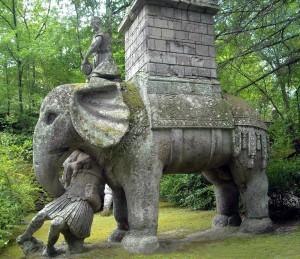 From Hannibal‘s elephants to The Temple of Eternity, from the Dragon with Lions to the wonderful Ceres, you (and almost certainly, your grandchildren) will be amused, perplexed, enthralled and fascinated as were such luminaries as Salvador Dali and Jean Cocteau. 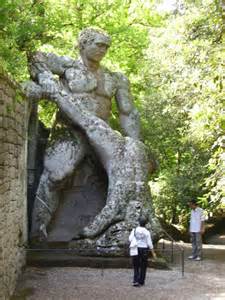 With the added benefit of a sight of the lovely Castle of Bomarzo, it is, in all, a wonderful and enlightening day out for all the family.