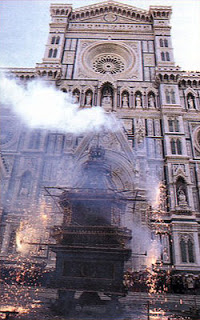 In Florence, Easter is celebrated with the Scoppio del Carro, the ‘explosion of the cart’. A massive, decorated ‘float’ is dragged through Florence by white oxen until it reaches the Basilica di Santa Maria del Fiore. After mass, the Archbishop fires a dove-shaped rocket into the cart, igniting the fireworks inside. An incredible display of sound, light and colour.
Taormina, Sicily, features a woman chosen to portray the Virgin Mary. She wanders through the dark streets in search of her lost son, aided by black-robed supporters who attempt to help her find Jesus. 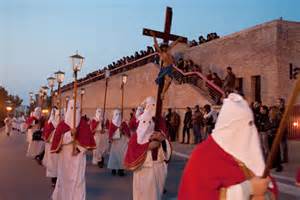 In Chieti, the procession (said to be the oldest and most moving in the country) comprises men and children parading through the torch-lit streets. They carry symbols characterizing the Stations of the Cross, one individual carrying a large wooden cross. The entire ceremony is accompanied by the haunting sound of about 150 violins playing ‘Miserere’ by Italian composer Savario Selecchy. 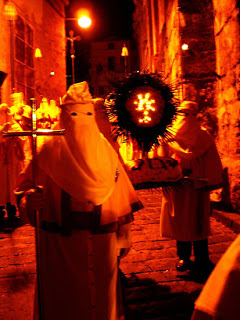 Sicily again is famous for Enna, where traditions go back to the Spanish domination of Italy. Two thousand hooded people pass through the town, carrying statues of the dead Christ and his mother. Others carry symbols of the crucifixion, including the thirty denarii paid to Peter to betray Christ as well as nails and a crown of thorns. 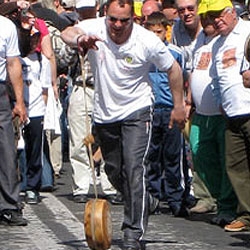 Panicale  is a small town which provides much merriment, by events such as the crazy ‘cheese rolling’. Participants roll their large cheese ‘wheel’ of around the streets. Whoever is able to get their cheese round the course with the fewest number of strokes wins the game. There’s also free music, free wine, and lots of free hard-boiled eggs! Sounds great……
This is just a small selection of some of the best known events. Every town, city and hamlet has its own variation.